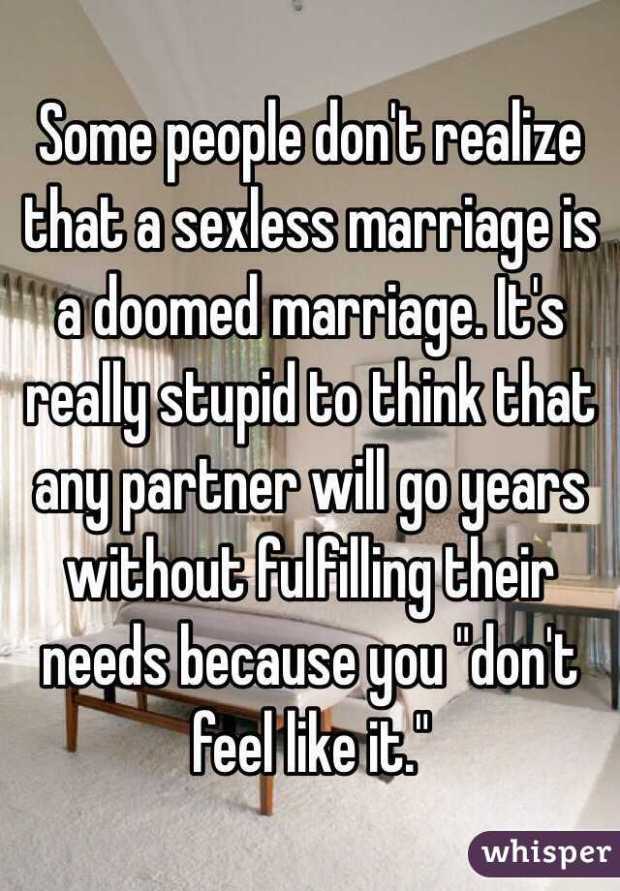 I guess this has been coming for a while.  I left my husband a note this morning telling him how disappointed I am that he has done nothing to try to improve the sexless state of our marriage. I stressed how serious I am about separating in January if things do not drastically improve and I’m so devastated that he isn’t even trying to fight for me and for us. He left me a voicemail apologizing and saying he will try harder and things will get better. I’ve heard all that before. Then we spoke and argued and I blew up and told him I’ve waited so much longer than I should have. Life is too short to waste it. I said I’m not willing to stay without sex, kissing and romantic love ANYMORE. Our problems are not just his fault, they’re ours (cause he said oh you’re perfect it’s all me). But the truth is only 1 of us refuses sex.
I said I’m so sorry you’re hurting but I’m hurting too. I miss love and I cant be unhappy n unloved any longer. I just can’t. He said he is not well and I said I know that. He said I love you! and I’m stressed! So I said I know I can be a crazy bitch but I deserve and need to be desired and made love to. He said he agrees lol. I said he doesn’t love me enough to share sex and love and I am not waiting another 2 months. I want a sex life now! Either go to the dr, explain you’re depressed n ask to try testosterone because it helps with low libido and depression or I’m done.  I know I shouldn’t feel bad but I do.  I do not want to hurt him anymore than he already is but I AM GOING TO LOSE MY MIND! Then of course he had to hit me like 5 times with the fact that his Mom died 2 months ago.  As much as I get that and I have tried to be patient, it’s just been way too long for me to accept that. So I feel sad, horribly insensitive and angry at the same time.

My husband and I had a great time together this weekend.  Saturday we went to a birthday party for friends of ours.  It was a lot of fun and we both enjoyed ourselves. Then we got home and of course, no sex.  I have already been rejected enough for many lifetimes, so I just cannot initiate anymore.  I’m also playing phone tag with the sex therapist.  It just made me a little sad because I really can’t imagine how we got to this place.

Since Monday, I have been dragging my feet a little and I wasn’t sure why.  I think it’s part frustration that this is what my life has become. And why isn’t he finding a sex therapist and making an appointment?  But I’m also petrified because if this doesn’t work, there’s no other choice but to get a divorce.  And I think that’s what has kept me from pushing ahead with therapy the last 2 weeks.

Today I feel less exhausted and more hopeful.  I actually took a nap yesterday afternoon lol.  It’s been a while since I took a nap in the afternoon without being sick.  It really helped improve my mood and I am no longer feeling so wiped out.  I think sometimes we forget how important sleep is for our health.  I know I am definitely guilty of that.

My Mother-in-law, who is a wonderful woman, had hip replacement surgery 2 weeks ago.  She was walking around for 3 weeks with a broken hip!  She thought she pulled a muscle at the gym.  So we have both been back and forth to the hospital and rehab.  Now she’s staying with his sister for a week.  So we went to her house and got all the clothes, toiletries, meds, etc that she needed for the week. I know it’s been difficult for my H seeing his Mom this way, especially after losing his Dad 2 years ago.  She says that I am the best nurse out of everyone.  I told her it’s because I have had so much practice with my Mom and my Grandma lol.

So finally, today I talked to my H and told him my fears about what happens if sex therapy doesn’t work.  He told me to try not to be scared and that it will work and we both have to believe that. He also said that whenever he gets negative, I tell him to try not to think that way because it just makes things worse. He said since his Dad died, I’m the one that is always positive and full of hope.  But the truth is, whenever I get hormonal or sad, he is always giving me hugs and cheering me up.

I just really and truly hope we can find the spark after so many years and figure out why the hell he has almost zero interest in sex.  I actually weigh less than I did when we were married. I’m pretty with a sexy body so I don’t think it’s a physical attraction thing. But he has gained a decent amount of weight in the last few years, and kind of let himself go.  So if anyone has cause to feel less physically attracted, it’s actually me.

Thank you for letting me pour out my thoughts and feelings.  It has actually helped me to not feel so alone.  Sex or rather, lack of sex, is not a very popular topic but it’s an extremely common problem in relationships.  I had no idea how many people, men and women were going through the same thing.  I always knew some women didn’t like sex or not very frequently.  But to have a man not want it?  It just didn’t seem possible. I know how silly and naive that kind of thinking is. I guess it’s just because every serious relationship I had ever been in was highly sexual and physically satisfying.  So I never imagined I would marry someone who would eventually have no interest.